Over the winter we built a chicken house at my house in the country. Along with our orchard, beehives, greenhouses and eventual cows (yes cows!), we’ll soon have a farm that produces real honest-to-goodness food. This is not an entirely foreign idea since as a kid my family had chickens, a large vegetable garden and milk goats, which we all tended. 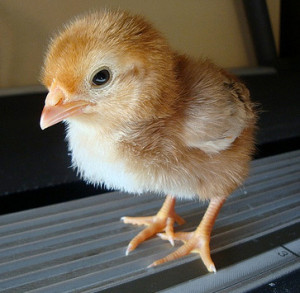 In a matter of weeks I will be re-living the springtime sounds and smells of my youth. Any day now a cardboard box with holes in the top will arrive, and when the lid is lifted so will our hearts, as we welcome the hungry baby chicks to their new home. The anticipation of this rite of spring reminded me of an episode we had with our chicks when I was about ten years old.

When they arrived the tiny herd of two-legged creatures looked like powder puffs on feet ~ completely and utterly adorable. We would hold them endlessly, never tiring of their downy softness. With patience they would nod off as we held them, their tweets becoming quieter until the sound was like sweet little whistling snores.

As spring turned into early summer they became “teenagers” with a gawky gait and rather ungainly looking feathers. This was when their personalities and markings became more pronounced. It was at this time that we learned the term “hen-pecked” was not something to be taken lightly.

As with humans, there was a pecking order, and in this brood there was one particular hen that was singled out from the rest of the group. During the daylight hours when they were free in the garden, this young hen could escape her aggressors, but during feeding hour in the pen, she was ruthlessly bullied. We would break up the fights thinking they would eventually stop. We decided her name should be Chicky Little. 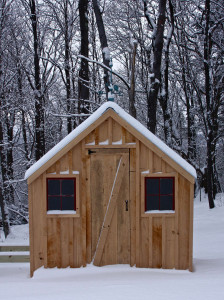 Now for most people who raise farm animals, there can be a certain detachment when it comes to their creature’s comforts. But in our house, my Mom tended to think of these animals as members of the family. On more than one occasion she was known to bring a newborn calf into the dining room overnight when the wind-chill was well below zero in wintertime. Or, in the spring, if we were to find a baby sparrow that had fallen from its nest, we would create a home in a shoebox and attempt to feed the orphan with an eyedropper. This exercise inevitably led to sorrowful tears as the once-healthy bird took in its last breaths. And so, as the attacks on Chicky Little became more vicious, we became her protectors.

We separated her from the brood to stop the gang-like aggression. And it worked. That is, until one afternoon when one of us somehow failed to divide her from the others. Mom was in the kitchen when the rumble started, and it was not a quiet one. Feathers flew. The brood looked more like piranha with wings ~ chasing, piling on, rolling over and screeching in the out-for-blood attack. Poor Chicky Little didn’t stand a chance…

We rushed out the kitchen door, Mom leading the way with her broom swinging. She broke up the fight, and as the hens scattered, there laid Chicky Little in a heap on the new summer grass. The other hens looked on in feigned innocence from the orchard. Momma gently picked up Chicky and indeed it seemed over. Her once upright comb was nearly pecked off. There was blood, and not a small amount. But she was alive.

Mom, tiny though she is, was never afraid to jump into action in an emergency. Within moments she had Chicky Little wrapped in a towel, placed in a box and off she sped to the Veterinarian.

Our Vet was well known to us, taking care of our cats, dogs and various farm animals whenever they were ill. But I doubt he was used to performing surgery on a Rhode Island Red. You see, these hens as baby chicks cost all of a nickel a-piece, and we had perhaps twenty-five of them. It was assumed that a Tomcat or other predator would take one or two, and frankly, unless we saw the attack they would not have been missed. But Chicky was a different case. She needed us and we had failed her. So there she was, being sewn up by the doctor at a cost much greater than that of the entire flock.

After a few hours, Momma and Chicky arrived home. Mom with a smile on her face, and Chicky sporting a rather grand looking turban. With her beady red eyes alert and head held quite high, she now looked more like the Grand Dowager than the one at the bottom of her social pecking order. Daddy came home to hear the story and rolled his eyes at the ridiculous looking bird, not to mention the extravagant bill for saving her life.

But Chicky Little’s special treatment didn’t stop there. Oh no. Instead of being separated from the vicious masses by a makeshift pen, she now had her own coop, which sat in the garden like a grand maison worthy of her newly elevated position.

Chicky Little lived out the rest of her days in relative luxury and sweet solitude. She lived, as they say, happily ever after.