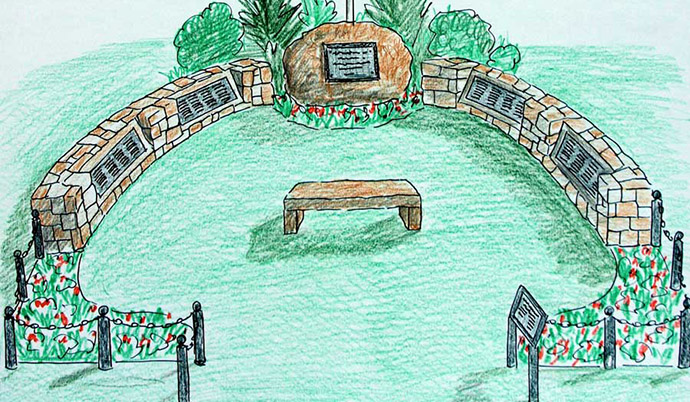 Not long ago I joined the Hamlet Committee in my hamlet of Hillsdale, New York. One of the missions of the committee is to help beautify our historic, little town. Within a week of my joining the committee, I read in a local paper that the veterans were raising money for a new memorial to be placed near the town park. I also read that it was to be four large black granite markers. Hmmm, somehow the proposed plan didn’t seem to fit the spirit of Hillsdale. So I got up my nerve and put myself where I really wasn’t sure I belonged.

Full disclosure: I’m a design guy. I never served in the armed forces, nor do I have a long family history of service—though I do have a nephew in Afghanistan. So here I was, a brand new member of the Hamlet Committee, and a design pipsqueak, facing honest-to-goodness warriors to convince them that my design was going to be better than theirs. Was I nervous? You bet. 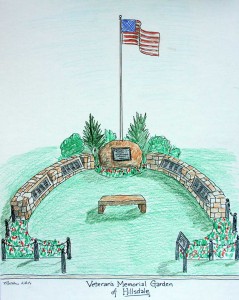 A meeting was set up with the two leaders of the local VFW. They began by sharing what they were trying to achieve—a memorial to commemorate everyone in Hillsdale, who had served in WWI, WWII, Korea and Vietnam. Each of the four wars would have a black granite marker with a list of names. These would be placed near an old, and more general, war monument which was a huge local boulder with a heavy bronze plaque.

With the help of the head of the Hamlet Committee, I had done my homework. I knew basically what they were hoping to create, but rather than four granite markers, I showed them my design (pictured above). I chose a curved wall of local stone that tied in visually with the existing boulder. Set into the curved wall would be four markers in bronze. At the center I designed a simple stone bench made of the same golden-hued stone.

Silence. My heart pounded as I waited for some kind of response. The older of the two men spoke first. “You know” he began, “when I was told we were meeting with you I wondered if you were going to be one of those protesters who follows us around everywhere—one of those people who picket us no matter what we do.”

Wow. Now I was silent. I’ve never been what you would consider a pro-war kind of guy, but even I know that if you are going to protest a war, it’s not the soldiers you attack, it’s the politicians who put them in harm’s way. I began to see the world a bit more clearly through their eyes (while trying to hide the dampening in my own). I knew that they put their lives on the line, not to create war, but to serve in one when called.

Fortunately, they both loved the design. They really responded to how it tied into the feeling of “our town” while creating a place to reflect and remember. They seemed honestly to be moved by the effort and intention, and I was equally moved by their openness and, above all, their heroism.

That’s the great thing about living part of my time in this wonderful town. It has allowed the most surprising alliances while expanding my thinking. And it has given me the unbelievable opportunity to honor those who have served all of us in ways that few can comprehend.

Efforts are now underway to raise the needed funds to build what will officially be known as the Veteran’s Memorial Garden of Hillsdale. To contribute to this effort, you may send your tax-deductible contribution to: