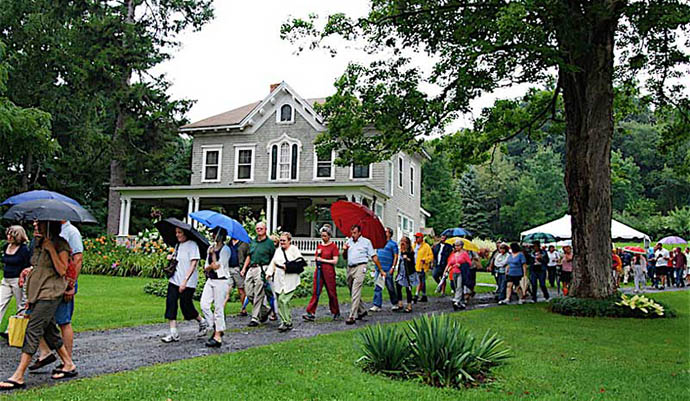 In August I helped organize a Historic House Tour in my favorite town—Hillsdale, NY. Hillsdale was founded in 1788 and was (and largely remains) a farming community. It was famous for its dairy farms, providing much of the milk and butter for New York City in the 19th century. Hillsdale’s amazing history extends far beyond bovine concerns, however, and remains a Hudson valley hamlet surrounded by lilting, rural beauty and dotted with architectural treasures.

Recently, thanks to the work of the Hillsdale Preservation Committee, an effort was spearheaded to make the hamlet of Hillsdale a State Historic Site. Thus the house tour. The event provided an opportunity to show off a handful of wonderful old houses while increasing awareness of Hillsdale’s important architectural legacy. Oh yes, and raise some money to help advance local preservation efforts.

Endless meetings, exhaustive planning, a hard working committee, and a legion of volunteers later, and VOILA! House Tour! In spite of the rain, the turn out was nothing short of stunning. Guests happily paid to enjoy a yummy picnic with live music followed by a tour of three historic houses, a church, and a special exhibit displayed in a fabulous (and currently uninhabited) 18th century brick house, known to many as the former restaurant, Aubergine.

Everyone was in great spirits and received personal tours by the justifiably proud homeowners, who shared the secrets of their story-filled houses. The following night, I hosted a patron’s party for the Patron’s and Sponsors of the event. The party was to honor those who generously opened their homes, making the event possible.

To contribute to the beautification and preservation of Hillsdale, make a check in any amount to: HECDC, with “House Tour” noted clearly on the check. Mail your tax-deductible contribution to: PO Box 305, Hillsdale, NY 12529.