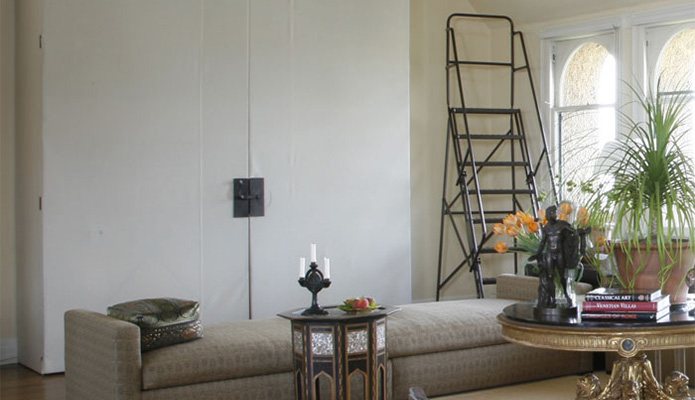 When a home is short on storage it pays to think outside the box. Such was the case in my former loft in Old Town, Pasadena. This spectacular space, a former conservatory on top of a land-marked 19th century hotel, was long on style potential but short on convenient living ~ there wasn’t a closet in sight! Rather than build one in, I wanted to play with the idiosyncrasies of the penthouse loft and come up with a wholly original concept. I decided to create a two-storey storage space to accentuate the soaring ceilings while in no way emulating built-in or traditional storage. The result was a practical but surprising solution to a serious storage dilemma.

I designed the ironwork frame to fit together like tinker-toys; this was essential simply to get the huge piece into the building. Once the framework was in place it was covered in awning material to protect the clothing from sunlight and dust. Conceptually it is very much like a tent (a very chic tent) and in one large gesture, I solved all my storage problems. With the pair of large doors and a handsome iron latch, the effect is quite elegant. When closed it had a very clean minimal look (see above). A metal warehouse rolling stair (nicely refinished in a bronze, powder-coat finish) makes access to both levels very handy.

Within the structure I positioned two poles for hanging clothes, a shelf above for luggage and two chests of drawers at the floor level for folded attire. The entire piece measured 10′ wide by 12′ tall and even though the scale is rather monumental, the overall effect was quite discreet. This was intentional so that one’s eye went to other elements within the room. Once the doors were flung open however, it was any clothes horse’s dream…a splendid display and handy access to clothes that made the question of “what to wear?” quite easy to answer.