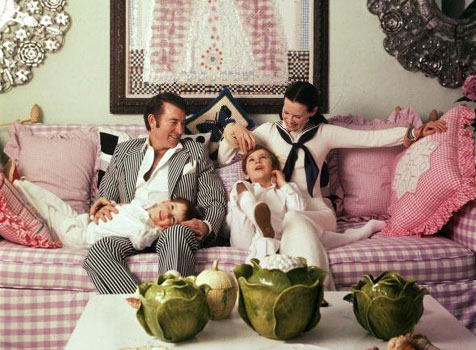 To be a stylemaker, you clearly need to make a splash, but there are a gutsy few who actually blaze trails. Gloria Vanderbilt is just such a woman, whose inimitable style has been leaving a path of stunningly scorched earth behind her for nearly nine decades.

As befits a style icon, Gloria Vanderbilt has been capturing the world’s attention from the moment she was an infant. At only 18 months, she was cast into the public eye upon the untimely death of her father and subsequent inheritance of the Vanderbilt fortune. Her early years were not particularly happy ones as she was continually uprooted by her peripatetic mother and later embroiled in an epic custody battle, resulting in her being wrested from her mother and ensconced with her powerful and controlling aunt, Gertrude Vanderbilt Whitney.

Like a fine wine, however, Gloria seems to have turned hard conditions into her favor. Fascinated by design and art, she threw herself into both worlds, studying at the Art Students League, and modeling before the cameras of Avedon and Horst. What she learned from her art and her travels, she subsequently incorporated into her fearless designs for clothing and interiors.

Whether it’s designer jeans, fragrances, household products, or Anderson Cooper, Gloria’s creativity is boundless, mold-breaking and stunning. For an amazing read about the unparalleled life of this tireless swan, we highly recommend Wendy Goodman’s book,The World of Gloria Vanderbilt.