Gardens, I believe, are a part of our collective subconscious, even if one’s personal experience with gardening is nonexistent. Maybe this stems from the ancient story of the Garden of Eden, or perhaps because we are all fed by the most noble of gardeners – the farmer. No question, gardens are in our blood. 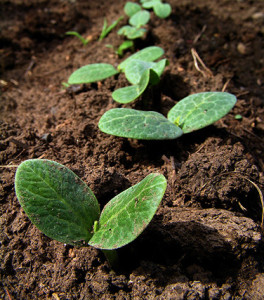 When I was around 9 my parents bought the five-acre parcel of land behind the trailer park where I was born (signing a note for $10,000, to Grandad’s warnings of financial ruin). Suddenly instead of a tiny lot, we had plenty of space to spread out. It was hardly Eden, but seemed so to us, with its many shady elms surrounding an old two-bedroom farmhouse.

We started by clearing mountains of tumbleweeds that had piled against two old barns out back that would hold our milk goats, many chickens, three ducks and a goose. My brother got a horse and our beagle, Princess, came with, excited to have so many species to chase around the yard. The first year we had a small garden next to the house, but the following spring we laid out a vast plot for our vegetable garden and orchard.

Daddy rototilled the near impenetrable dirt, and with some amending, it started to look like something that would accept plants other than prairie grass and thorns. Soft little hills were mounded for squash, cucumbers and melons while seemingly endless rows for beans, corn and okra were created. Little packets of seeds waited to be torn open, each one with a romantic and colorful illustration of what seemed a dubious dream. Could those little dried up seeds actually produce the outrageous red tomatoes, dew covered green beans and mouthwatering corn pictured on the packet? “Not likely” was my ten-year-old opinion.

Planting began in earnest. Lettuces, greens, radishes, carrots, string beans (yellow and green), tomatoes, corn, okra, peppers (bell and hot), cucumbers, yellow squash, zucchini, winter squash, red onions, scallions, and black-eyed peas. We watered and it seemed that only the weeds were paying attention. But just when I was giving up hope, a miracle occurred. Those tiny seeds turned into determined sprouts, who, like Mighty Mouse, lifted several times their weight in clods of hard Texas dirt to face the springtime sun. Amazing!

The sprouts became seedlings and overnight those little plants were doing the Jack and the Bean Stock trick. Carrot tops looked like exotic ferns, beans required stakes and twine, and squash plants ballooned like some mutant plant from a 1950’s science fiction thriller. By early summer things were really cooking. Radishes, lettuces and carrots were the fastest to grow and first to be devoured. The bitter taste of our leafy greens took some getting used to after years of grocery store, plastic-wrapped iceberg blandness.

As soon as the golden squash blossom appeared, the fruit came overnight. The yellow squash was easy to spot but the zucchini was sneakier. We would look through the huge scratchy leaves, avoiding enormous bumblebees that hid in the yellow-orange blooms and the occasional horned-toad seeking shade. Hiding there were zucchini, exactly the same green as the stems and leaves. We picked tons, but often missed a few only to find them the size of watermelons the next day. You think I’m exaggerating. I am not.

In many ways I hated that garden. To me it represented endless backbreaking work in the hot sun, two things I’ve spent a lifetime trying to avoid. Weeds were more than plentiful and were the only things that grew faster than the zucchini. Watering was hard labor because our only irrigation was a single hose that had to be carefully negotiated not to destroy the plants. Hoeing was the hardest part, and the cause of endlessly blistered hands. That Texas dirt was eager to become cement, but when it was turned over (removing the unsightly weeds) and transformed into damp, dark soil, it showcased our pampered, fruit laden plants. Nothing is more beautiful. I definitely liked that part.

But my favorite activity in the garden experience was harvesting. Not those pesky beans mind you, because it took hours to pick a row and we had many, and they, like the zucchini, loved to play hide and seek among the leaves. But by mid summer everything was producing and picking the garden was a daily activity that brought an undeniable rush of accomplishment and culinary delight. I would take a bushel basket or two, and select the hard-won treasures, arranging them like a perfect, Technicolor, Dutch still-life. As it turned out, those packet illustrations did not lie. Then Mama would begin canning and our cellar shelves would be filled with colorful jars of fresh-picked garden glory.

I never understood the miracle of food until we grew our own, and that remains an enormously valuable lesson. The taste of a tomato salad, still warm from the sun, the gorgeous flavor of yellow squash cooked with diced onions and a bit of cheese, fried okra and black-eyed peas with hot cornbread. The visual beauty of our labors, the mouth-watering aromas coming from the kitchen as they were prepared and the thanks we gave before each meal for the feast before us ~ that was what our garden was all about.